Most of you know that I was never a fan of Barack Obama.  I don’t have any hatred for him, I just think he was mediocre.  Not really deserving of either the intense adulation or the burning disdain that he received.  Inconsequential, historically, but for his African heritage that made him stand out.

Where he really “stands out” is in this supposed “official portrait” of him.  I have to say that it’s made me see Obama in a different light.  Here we are in these times of danger and division.  America feels like it’s reaching the boiling point, but Obama has taken a break from retirement and given us all the gift of a levity break.

I didn’t think it could be done, but Obama has out-trolled Donald Trump and it’s brilliant.  It’s easy to imagine Trump trying to make Democrats’ heads explode by unveiling his so-called official portrait in 2026 and it being one of those memes of him standing on a tank or something.  Obama, I’ll admit, is classy and has taken that concept of a goofy portrait and beaten him to it with the sort of subtle nuance he was known for.

Every aspect of this practical joke is genius.  For those of you who don’t understand art perhaps as well as I do, I’d like to explore it with you.

First thing we have to talk about is the choice of artist.  If the man wasn’t real, he would have had to have been invented.  The Alt-Right is completely apoplectic over Obama’s choice of a racist lunatic to produce this painting.  There’s no way that they could resist thinking this was real when Obama did something that over-the-top.  For me, this was the giveaway.

I know everybody is like, “no way” but Obama knows that nothing makes his opponents crazier than someone wanting to hurt the white women.  That’s how you set the stage for a truly great prank.  You lay out all the groundwork and build a plausible cover story.  There are layers of brilliance at work here, people.

Let’s discuss the background.  Now, I’m not that great a practical joker, so I would have gone for something a bit more blatant in my choice of background.  Maybe a Kenyan village to really get the Birthers triggered?  No, no, too obvious and the trademark Obama subtlety wouldn’t be there.

Instead, it’s like he’s coming out of the bushes.  Like, he emerged from the Bush Administration.  And notice that he has the twigs and leaves stuck to him.  It symbolizes how he took over after all of Bush’s mistakes and still had to deal with the failures stuck to him for his entire Administration.  Had he been in office one more year, the economy would’ve taken off and the flowers would be even more in bloom in the painting.  Did he mean it as a jab at Bush?  I don’t know.  But probably.

Look at the ground.  Notice how he’s stomped one of the purple flowers with his feet?  I think that’s his way of showing his contempt for the voters in “purple” swing states who voted for Trump after voting for him in 2008 and 2012.  Maybe the two flowers represent his two terms?  Breathtaking.  Maybe the white flowers being so small and beneath him or bitterly clinging to the wall around him is supposed to communicate how they failed to come to grow as the flowers of color did.  Even in a humorous work of art such as this, it’s understandable that he’d want to vent a little bit of the bitterness.  I’ll give him a pass.

His feet seem to be entwined by the plants.  Perhaps it’s there as an indication that he’s trying to get all the right-wing conspiracy guys to think he’s still trapped in the weeds from the supposed Trump Tower wiretapping scandal?  I can easily see InfoWars spending a whole hour on that interpretation.

Now let’s talk about the man himself.  I love the “I’m taking a crap” pose.  He could have really oversold this by standing up, looking arrogant with his chin up. Instead, he sent a message of, “I don’t give a shit what you Trumpalos think.  Go ahead and spread your photoshopped memes of me sitting on a toilet.  This isn’t real and you’re going to look stupid.”  For Obama to be sitting like this really illustrates how well he understands memes and how his Republican marks would use this imagery in their haste to think it was legit.  It’s no wonder we couldn’t beat this guy or make any scandals stick.  He thinks several moves ahead.

He’s also sitting in a chair, which is symbolic.  Remember Clint Eastwood’s speech at the 2012 RNC?  He did this really painful bit where he was talking to an empty chair, pretending that Obama was sitting in it.  I cringed watching it, but Obama is owning it now.  “Yeah,” he seems to say.  “I’m sitting in a nice antique chair in the middle of a hedge while wearing a suit.  The chair not only isn’t empty, but I can fill it wherever I want to. Eat a dirty hairy dick, Dirty Harry.”

Note that he has six fingers on his left hand.  The extra pinkie is hidden under his palm.  This is probably the symbolism that both artists and Internet trolls will debate until the end of time.  It really is the only thing that I think Obama might have been overestimating his audience’s intelligence over.

One possiblity is that he’s demonstrating how easily he could hide obvious, supposed “scandals” even by hiding them in plain sight since the media wouldn’t question them.  None of them are going to insult a black president who was painted by a black artist, right?  No matter how obvious, they’ll pretend that the extra finger isn’t there and call right-wingers “conspiracy nuts” for thinking it’s there.

Another possibility is that he’s giving a subtle cue that Michelle Obama is “hiding” a “pinkie”, if you know what I mean.  His wedding ring is plainly visible and the idea that Michelle is a tranny is an admittedly hurtful meme that right-wing trolls have been attacking his family over for years.  Obama is making them think, “Ah ha!  There are two pinkies in that marriage and one is hidden!  Knew it!”  My third suggestion is that it involves a reference to Count Rugen from The Princess Bride, but I’d have to watch the movie again to figure it out.

So for all that, America thanks you, Obama.  Not ironically: “Thanks, Obama!”  We needed a national belly laugh and this is it.  I’m sure the Alt-Right is going to be annoyed that they’ve been the butt of the greatest national practical joke in history once your true portrait is unveiled.  Maybe the Left can’t meme, but they do it with an artistic flair.

I wanted to discuss Michelle Obama’s fake portrait too, but James Woods beat me to it.

I admire Kerry Washington and was so pleased to meet her at the WGA Awards last year. I’m just confused why the newly unveiled Smithsonian portrait is of her? Seriously what gives? pic.twitter.com/2hIlGJGK22

That’s just wrong.  Michelle hasn’t been gone so long that we’ve forgotten what she looks like.  This part of the prank fell flat.

Barack, however, has delivered as a Master Troll disguised as a Garden Gnome.  I salute you, Mr Former President!

The Mascot Of Team Treason

Obama Was Devastated When Trump Won 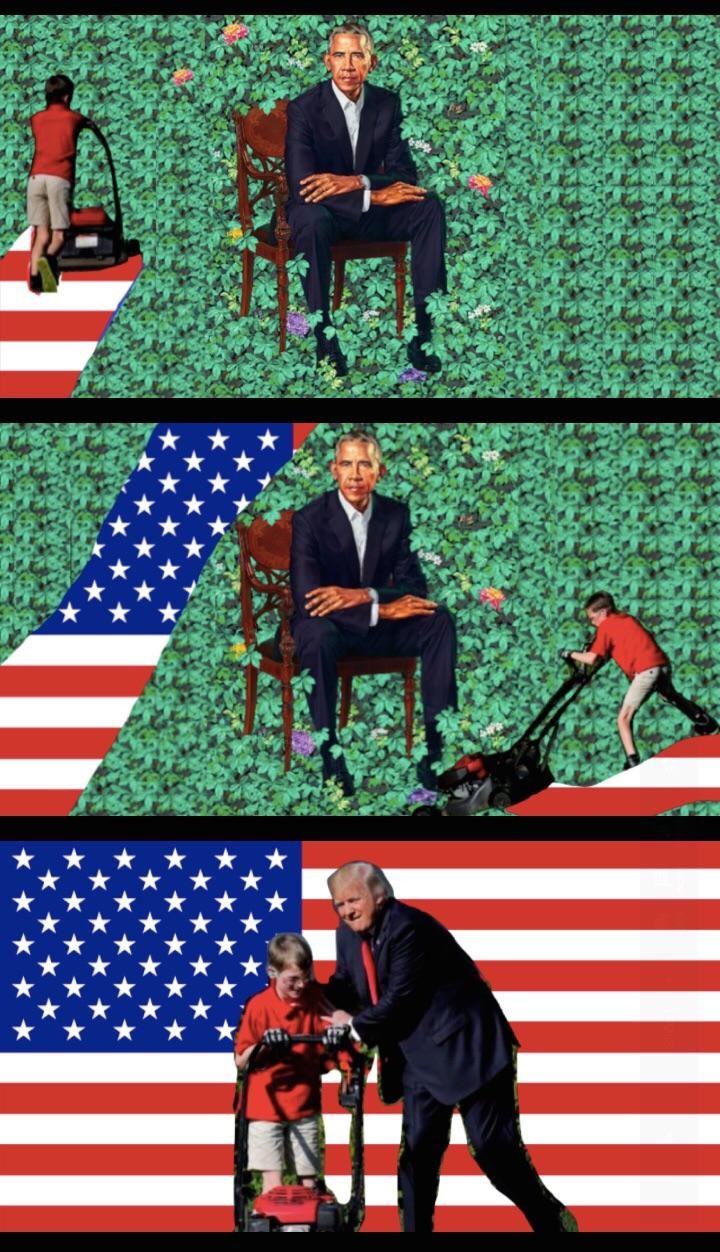 All joking aside, can we agree this painting is atrocious? It’s REALLY bad. Is this debatable?

I don’t care if you’re an Obama fan or hater. This painting is objectively and artistically the single worst portrait I’ve ever seen of any public figure. Why this? Everything is wrong with it.

worst portrait I’ve ever seen of any public figure

I have no idea what the goal of these portraits was but Obama’s is “OK” and Michelle’s is less so. For the Smithsonian they are fine, there is weirder shit out there. I have taken the liberty of googling “bad celebrity portraits”,

At least Obama’s actually looks like him. All that bushy shit is too much of a distraction.

Yeah, it’s good that it looks like him. It’s just that I don’t think it’s “him”. That’s really how he wants his legacy to be portrayed? Not energetically standing and bringing hope, but sitting down with a messy burrito shit?

This painting is unworthy of ANY president. All of the ways it’s wrong for Obama.

See, I like Michelle’s better artistically. It just doesn’t look like her at all. Even the facial expression is wrong.

See, this is how a real statesman handles shitty art.

It doesn’t look like her and no one would wear that humongous “dress”.

To me, this is an excellent presidential portrait. It captures that piece of his character as a conflicted, thoughtful, and surprisingly humble man. It has a certain sadness too, that reflects his awful tragic death.

Brilliant. Loved your dissection. No, I haven’t been body snatched today.

Brilliant. Loved your dissection. No, I haven’t been body snatched today.

Nobody should read this through the pro or anti Obama lens. I could have written this same post either way, with minor revisions. Regardless of what you think of him, we can all look at this painting and say “Damn”. So you can enjoy this and not be ashamed.

When I say that Michelle’s gets it better I mean there are a couple of things you can point to. See how her dress has different colors woven into it like a quilt? You could say that speaks to the fabric of America itself, right?

Look about an inch down from her arm in the picture in Wood’s tweet. See that circle divided into two colors? That’s representative of her husband. His signature even has that symbol. That complete identity that’s always been split between two worlds and identities. I’d fully expect that to appear in HIS portrait as an example of who he is. It would work.

Mrs Thrill observed that what’s really wrong with Michelle’s portrait is how muted the colors are. She considers her to be “vibrant”. She always wore bold colors and styles with a personality to match. In this portrait, color is an afterthought, a tiny detail.

I think pfluffy has it right when she says Obama looks uptight. What makes it even worse is that he’s not wearing a tie. He looks like he’s uncomfortable even as he’s trying to be more relaxed. It’s possible you could see it as he tried to be this laid back, non-intimidating everyman, but wasn’t quite comfortable in the old and stuffy role that he was in as president. The chair is ornate, antique but it doesn’t look comfortable at all.

But see, you could make that judgement and still be utterly baffled by the hedge. Where’s JDPS? I need a real artist to tell me what I should be looking for here.

I’m being much nicer than this guy is:

Barack’s painting looks like he’s coming out of a stereogram. Remember the art where you let your eyes glaze over, stare at it, and a 3D image suddenly appears. They were popular in the 90s. Maybe that’s what he was going for.

So THAT’S why I keep seeing that damn sailboat.