Relax, it’s me, Thrill.  Alright, first thing I should probably mention is that I’ve changed my pen name.  I don’t want to alarm anyone.  It’s something I’ve been mulling for months and I’ve decided it’s time.

Do we have time for some of that “lore” I keep talking about?  If you’ve ever wondered, “Thrill” is a pretty innocent nickname in origin.  At the time I first discovered Right-Thinking from the Left Coast, I was working for one of those bosses who liked to give everybody quirky nicknames, sort of like how George W Bush was known to do.  Every now and then I’d do something good and she’d say something like, “Hey, way to go, Will the Thrill!”.  I liked her.

Anyway, when I started participating in that community, I didn’t have another handle in mind, so I just started using “Thrill” since, honestly, I thought it was amusing.  In reality, I’m a bookish (but generally polite) introvert and a shut-in who rarely goes on adventures and stuff.  And that’s the way I like it.

It never occurred to me that I’d still be writing under that name after 14 years.  I made some friends on RTFLC, we moved on to other projects, and I just kept the name because it’s how everyone knew me.  This was a good thing, since there was something like a 7 year gap between the extinction of our previous blog and this one.  Keeping everything “different but also the same” provided some continuity in our unsteady first months.

But if there’s one thing I learned from that excellent and groundbreaking film, The Last Jedi, it’s that leaving behind the past is necessary for defining the future.  It doesn’t mean the past is bad.  Contrary to that, I think it’s great.  I’m proud of the writing and discussion I’ve provided and grateful for the connections I’ve made over the years.  On the other hand, “Thrill” just isn’t a good name for an author these days.  Don’t worry, I’m not taking myself seriously or expecting anyone else to (I mean, how could you?).   It’s simply time to look forward, not backward.

So I’m now going by a derivation of my name.  It’s still a pseudonym because I enjoy being a nobody and prefer to avoid embarrassing my family or employer through association with my writing.  It works better as a pen name, however.   ah, let’s not make too many changes at once.

That’s that.  Away with childish things.

Speaking of childish antics, yes, the whole “Nikolas Cruz is a white supremacist militiaman” was a 4chan-related hoax.

Jereb, who I’ve encountered before on Gab and can confirm that he’s worthy of mockery, appears to have decided to be “in” on the joke and to keep it going long after it should have been obvious that it was no time for lulz.  I mean seriously, look at this nut:

He can’t keep getting away with it.

Lots of people are blaming the media for this debacle, but I don’t.  Not entirely anyway.  There’s only so much you can expect when reporters get multiple corroborating accounts from trolls who deliberately lie to them.  For reporting it, I give them a pass, but they should have retracted the “white supremacist militia” allegations immediately after the Sheriff’s Department did.

I’ll agree that the ADL should be a bit embarrassed for admitting that they read 4chan, but it just goes to show that my rule about distrusting everything reported within the first 48 hours of a mass shooting or terrorist attack is valid.

If we’re talking about trolling, nobody can top POTUS.

Just like they don’t want to solve the DACA problem, why didn’t the Democrats pass gun control legislation when they had both the House & Senate during the Obama Administration. Because they didn’t want to, and now they just talk!

I can answer this.  Between 2009 and 2011, when the Democrats controlled both houses of Congress and the White House, they were still holding onto the illusion that they could maintain conservative Democrats in red states.  Remember the Blue Dogs?  Pro-Life, Pro-2nd Amendment Democrats?  Yeah, they’re all gone.

The Democrats had hoped to keep them in place after they used them to sweep the 2006 midterms, they didn’t want to risk losing them in 2010, and so they didn’t move any gun control legislation.  They really didn’t expect Obamacare to be as disastrous as it was, electorally speaking.  The red state Democratic wipeout was almost total and permanent.  It took something as crazy as Roy Moore’s nomination to get a Democratic Senator in Alabama, but he won’t last long once he has a voting record and a sane GOP opponent to run against.

Now I wager that if Democrats ever get a majority in Congress again during a Democratic presidency. they won’t make the same mistake, but nobody should be surprised that they declined to do anything back in Obama’s first term.  They had a national coalition to maintain in the days before they were happy being a coastal, urban party.

Could Mueller’s indictments of a bunch of Russian bot organizers have some unintended consequences?

Your indictments yesterday pave the way to arrest illegal aliens / dreamers who show up at protests for not being registered foreign agents and violating FEC disclosure rules!@KurtSchlichter @kausmickey pic.twitter.com/r5WZIYVpeG

That sounds about right.  Somebody want to tell me if Cody’s wrong?

I don’t have a non-expert analysis nor have I found anything to contradict my initial feelings on the indictment.   Here’s a solid take though.  5 important details you missed in the Russian bot indictment.

As expected, the Rotten Tomatoes audience score is wildly diverging from the critic score.

Far be it from me to call shenanigans, but I believe that 73% is the line at which a film is dropped from the upright popcorn symbol to the lesser ranking.  Seems like Rotten Tomatoes could tactically delete just enough negative reviews to keep it hovering right about where it is now.  Were they so inclined, of course.

I don’t have much else to go through.  Pretty much all of the oxygen in the news cycle was inhaled this week by Parkville and Mueller.  Does anybody care about the Olympics?

How was your week?

Shut Up And Dribble

But if there’s one thing I learned from that absolutely disastrous and mythos destroying film, The Last Jedi, it’s that leaving behind the past is necessary for defining the future.

Fixed it for you.

You do realize rotten tomatoes is owned by Warner bros, right?

It’s just beyond my modest means to contemplate why a competitor studio to Disney, with a competing superhero universe (that isn’t doing very well by comparison) would throw in their adulation for this movie, despite the secret meetings to advance a liberal agenda.

There’s some 3d fucking chess going on in a conspiracy like that that is just beyond me.

It’s not conspiracy. It’s the Quest for Social Justice. I hate to pull the politicization of entertainment discussion off of your own thread, but we keep seeing time and time again that news media, Hollywood, and professional sports are perfectly willing to sacrifice viewership and profits if it means advancing a preferred social agenda.

It’s why I wondered a few weeks ago if Disney’s focus on diversity hurt The Last Jedi in China and if they’ll consider making changes in Episode IX for the sake of profits or if they’ll ignore it in favor of “Strong Women” and “Muh Diversity.”

Alright, first thing I should probably mention is that I’ve changed my pen name.

since there was something like a 7 year gap between the extinction of our previous blog and this one.

It’s amazing how well we resumed continuity. We’re still missing a few of our old members I’d like to have back. Stogy, Section 8, Iconoclast, and more but it’s an absolute miracle that we were able to resconstitute the gang after such a long hiatus.

I think more telling that RT’s rating is that the film pulled in $200 million this weekend.

It is, but you have to take into account that it has had a lot of postive press, strong reviews (whatever the motivation), and comes from an established and much beloved brand. Would be shocking if it didn’t have a strong opening weekend (something like the 5th best in history in terms of dollar amount).

The week 2 numbers will be more meaningful. If it’s great, people see it again and they tell other people to see it.

Nevertheless, it’s guaranteed a sequel no matter what happens. Anybody who was hoping for it to bomb should be eating his own liver today.

I’ll say this: Marvel movies at least get the characters right.

A great article in the WSJ on Friday details how back in 1998 Marvel, fresh out of bankruptcy offered the entire Marvel line of characters to Sony Pictures (who just purchased the rights to Spiderman) for a measly $25 million, they declined…………ouch.

Marvel decided to make their own pictures, later selling to Disney in 2010 for $4 billion. In the last decade Marvel has released 17 super hero movies grossing $13.5 billion.

Between Pixar, Marvel and the Star Wars brand from Lucas LTD, Disney has positioned itself nicely for years to come.

Me and my boys will go and watch Black Panther next weekend. I looks lik e a wild ride. Marvel has consistently produced entertaining movies, even the weak ones are pretty decent.

IT no wonder that ist doing so wall, there is a bit of a cultural push to go see it, pretty much every black family is gonna go see this.

This whole Russian collusion investigation and its “indictments” have been a resounding wet fart. And it seem the Whole Flynn fiasco is turning it to something else? dropping of charges?

I’m screwing around with some of the data (because I have creative ways of avoiding my family on Sundays).

Curious to see if I can come up with some good conclusions like I did with Ghostbusters 2016.

What’s interesting is that Black Panther has about the same audience score as Thor: Dark World, but it’s the worst rated MCU film according to critics.

Marvel fans and critics tend to agree with each other on Rotten Tomatoes ratings for individual films with only a couple of outliers. Black Panther is by far the most divisive between the two. 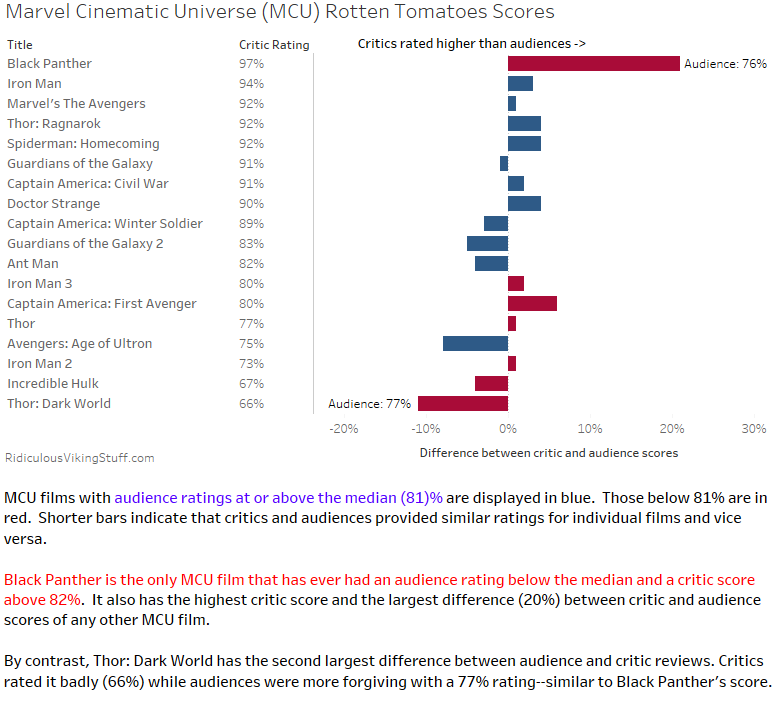 RedLetterMedia review on Black Panther. They’re the reviewers I trust most.

Saw it. It was good. I’d probably give it an 80% – there were a few boring/dragging parts. The social justice BS could have been a lot heavier than it was.

As I hear more and more reviews like yours, I’m convinced this is true. If this sort of thing keeps up, it’ll be the death of Rotten Tomatoes (up to you if that’s good or bad).

Also quite the discrepancy at metacritic between critic and viewer average.
http://www.metacritic.com/movie/black-panther?ref=hp

See, from what I’ve been hearing from reviewers and others, the Metacritic score sounds pretty close to the consensus. I’m not hearing anything at all from people who’ve seen it that suggests Black Panther should be in the “Wizard of Oz” tier.

It does sound like it’s typical of most MCU origin films though. Strong movies, but low to mid-90%’s.

Are they data entry errors or is it something more sinister?

William Guess, thank you for this post. Its very inspiring.

Do we have a bot problem or is Thrill just fucking with us?

I’m sort of gratified by it. We’re now big enough that they think we’re worthy.

What I don’t understand is what the purpose of it is. They don’t even try to sell Viagra now.