Conservative taggers running loose in Hollywood, too funny. The image presented is the work of Sabo, who won’t let the elite off the hook . The 3 billboards hijacked were in reference to one of the movies up for best picture. Much like Kirsten Gillibrand, Nancy Pelosi, Barbara Lee, and many other congressional women who found it convenient to look the other way when bimbos were erupting, the old guard of Hollywood made their pact with the devil and put career over outrage. So now the female leaders in both camps magically found their nuts,  can take the moral high ground, and say ,”how awful that is” when asked.

A bit of explanation on the title, I will be snoozing and not watching the Oscars this Sunday. But for those more hip and plugged in than me, here is your chance to tell me what I’m missing.

Aside from the fact that I don’t go to the movies that often, my opinion about the quality of films has not changed in the last decade. I like the experience when I do go, I like the Imax experience (not a big fan of 3D), but for $45 (for 2, with all the extras) I not only want a movie I can sink my teeth into but something to discuss with the wife on the drive home.

Of course I don’t like the politicization of the event, but that’s just a given. And I think Jimmy Kimmel is a douche canoe of the highest order.  I used to like him on the Man Show. But like editors at newspapers and professors at the university, when group-think has a lock of 99% of your peers, you fall in line like a good little soldier. So now he is insufferable.

Has anyone watched any of the  movies nominated? I Redboxed Dunkirk about a month ago, so looking forward to seeing that and yet I was disappointed. I will see Darkest Hour when it comes out, this looks really good. And that Greta Gerwig movie looks promising. Having read about the political angles of Black Panther, I will make up my mind.

I got a buddy who goes to the movies about once a week, is always saying, “You gotta see[this] or [that]”, most of the time I just nod, having zero interest with most of them.

It doesn’t help that most Hollywood actors are so vapid and shallow. Being old enough to remember real movie stars, the current crop is uninspiring and listless. I like Chris Pratt (the twitter long knives coming out after his “praying for you” tweet for Kevin Smith, just disgusting).

Oscar ratings keep dropping year after year, is it like the NFL where folks don’t want to be lectured to?

So, anything pique your interest? Those in the entertainment industry (you know who you are), gives us your take on the state of things there.

The fact that they are bringing these two fossils back is quite telling about their lack of originality:
http://variety.com/2018/film/awards/oscars-faye-dunaway-warren-beatty-return-best-picture-1202715285/

And they could do better for sci fi. Honestly, I don’t get “The Shape of Water” hype.

I never watch the Oscars. Don’t have much interest in watching actors congratulate themselves for their crappy movies that I don’t want to see.

The last Academy Award Winning Best Picture movie I saw was “The King’s Speech” and that was only because Mrs Thrill was watching it while I was in the room. 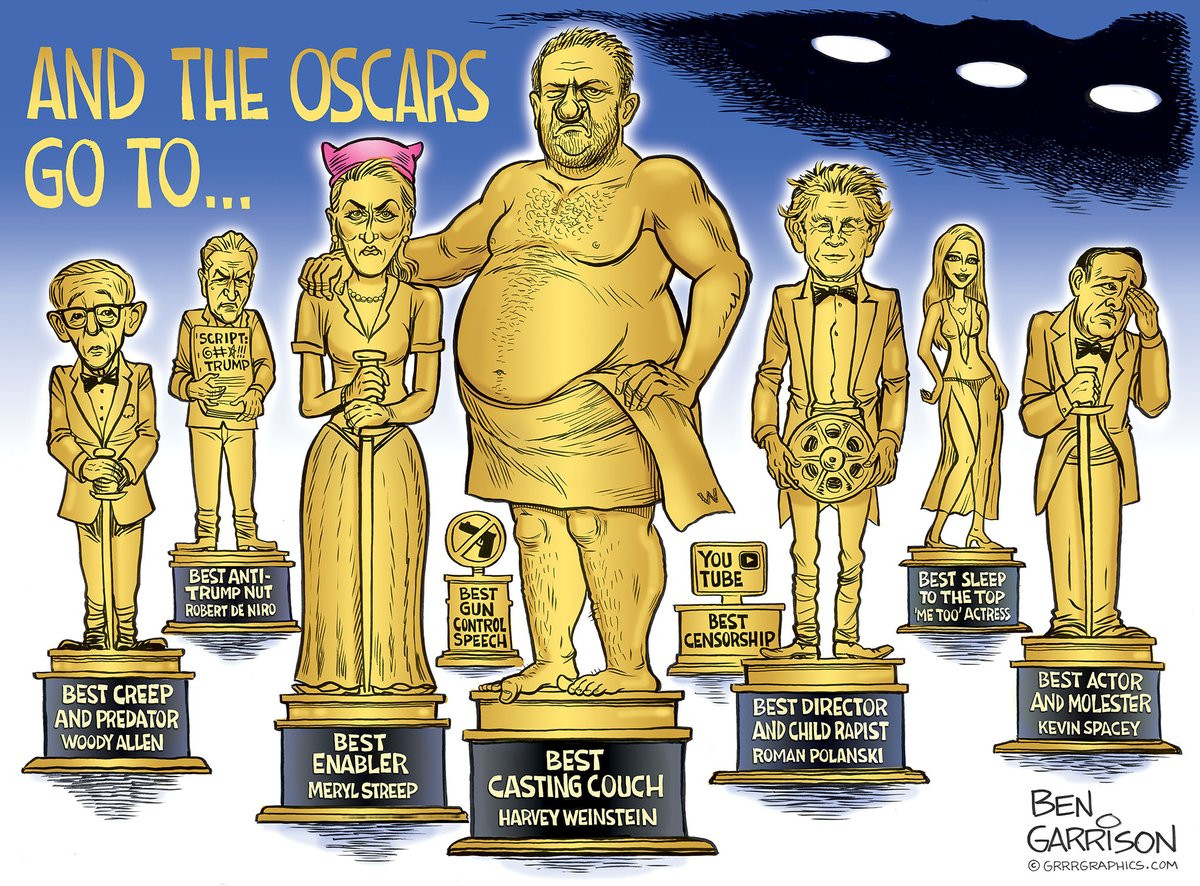 Oh look, #metoo is so dedicated to exposing sexual predators and allowing victimized women to speak up, that after the rapist Kobe Bryant won an Oscar, they all gave him a standing ovation. It’s hard to take these phonies seriously since there is no verifiable standard; Bill Clinton/Kobe Bryant-good, Harvey Weinstein/Kevin Spacey-bad. And the worst ratings since 1974, I guess they missed me.