Former Supreme Court Justice John Paul Stevens–not to be confused with John Paul Jones, who is differentiated by having been awesome, a patriot, and proof of the value of privately owned weapons–has editorialized that the 2nd Amendment should be repealed and that there is no individual right to possess firearms.  High school kids talked him into this, apparently.  No idea where he stands on eating laundry soap.

It’s refreshing to see that he’s finally acknowledging the supremacy of the Constitution above his own feelings by suggesting that the Constitution should be amended to resolve a major social issue.

Stevens has done a wonderful thing.  First, he has verified for anyone who ever doubted it that the political Left really does want to disarm Americans.  It’s getting harder and harder for the anti-gun side to deny that they only intend to stop at “common sense reforms”.  I like to see the one side that lies and misleads constantly about all facets of gun rights and gun control finally tell the truth about something.  In this case, its own motives.

The second great development is that Democrats are going to be put under pressure during the midterm campaigns to either support or denounce Stevens on this topic.  Repeal of the 2nd Amendment doesn’t have majority support in any region of the US.  I don’t think it even has majority support among a single demographic of Americans.  It’s an extreme position that Democrats are most welcome to chain to their necks.

I mean, 30 states voted for Trump in 2016.  I’d say there’s an absolute certainty that not one of them would vote for repeal and the effort to do it would serve to further alienate the coastal, urban Democrats from, well, everything else.  Particularly every state which validates a right to keep and bear arms in its state constitution.

Finally, any attempt to introduce a repeal of the 2nd Amendment would be a perfect opportunity for pro-gun Americans (the overwhelming majority) to introduce a competing amendment which would strengthen the 2nd Amendment.  Really, imagine a replacement for the 2nd Amendment that eliminates the confusing militia clause and emphasizes the right of Americans to own and carry firearms for self-defense and for the security of the nation against all enemies, foreign and domestic.  That’d shut the likes of Stevens up and it has a much higher likelihood of ratification than a mass gun grab, right?

In conclusion, I’m pleased with Stevens’s statement on this.  Nobody should be upset either.  In fact, I think the likeliest outcome of this effort is that we’ll see both a higher respect for the Constitution by the Left and an affirmation of the individual rights to keep and bear arms by the time the Parkland farce finally runs its course.

My Rights As A Citizen

No High Capacity Periodicals For You

Dicks Does It For The Kids

Congressman Scalise and Others Shot

The left has repeatedly proven that they are against individual rights and responsibility. I’d like to know where they think they would get the 2/3 majority needed for this, because traditionally even other anti-gun Democrats haven’t been willing to touch this:

There’s a lot to dislike about Lindsey Graham, but he’s on target, so to speak, here.

I’m in full agreement. It’s especially good for this year, where Democrats have to run pro-2A candidates in districts and states Trump won. It’s a great wedge that could further illustrate how far Left the Democratic Party has moved.

I’m confused about where your conclusion is on this. An obscure public figure writes an opinion piece about his interpretation of the second amendment, and since he concludes that (in his opinion) the second amendment doesn’t mean individuals have the right to bear arms that means republicans win back their seats in November? Or are you inferring that you’re happy he wrote this opinion because that now means the veil has been lifted and all Democrats support gun prohibition? This is really a lot of wishful thinking if you think this is what republicans can run on in November because… Read more »

I’m saying that the Democrats are most likely to be successful in the midterms by running pro-2A candidates in counties and states Trump won and that the GOP’s best bet is to lump them in with the lunatic leadership of the Democratic Party–which has worked in the past. The idea is that the Democrats can nominate outstanding candidates like Saccone, but still split voters by pointing out how they’d be beholden to the firebreathers in the national party who want to enact an extreme agenda that their constituents don’t want. The fact that you just placed impeaching Trump and reinstating… Read more »

Why wouldn’t democrats reinstate Obamacare? Repealing Obamacare was one of the most unpopular things republicans did during their pathetic tenure, and we’re working on the sixth iteration of failure now, right? The fact is most Americans support the affordable care act, and the most unpopular aspect of the bill was the “all or nothing” provision for qualifying for the subsidy. Republicans and special interests lobbied hard for the “not a penny over this” qualifier to receive benefits o purposely sow discontent about it, and the fix will be easy when democrats have majorities again. They’ll institute a pyramid ratio of… Read more »

Judge, just out of curiosity, you say Trump will be impeached, on what grounds? Making an effort not to sound like crazy Maxine Watters, can you tell me what crimes you think Trump is guilty of that would result in impeachment? If you are going to use the baseless “obstruction of justice”, can you please connect the dots for me? You mentioned the rejection of Trump’s request to dismiss the emoluments lawsuit, you do realize that allowing the suit to proceed is miles away from an actual finding of a violation, right? Another question; does a sitting president have a… Read more »

Why wouldn’t democrats reinstate Obamacare? Because it was a walking electoral disaster for their party from 2010 to 2018. The fact is most Americans support the affordable care act, and the most unpopular aspect of the bill was the “all or nothing” provision for qualifying for the subsidy. Americans support wider and affordable coverage, which Obamacare failed to do. They also support certain provisions, such as keeping kids on their parents’ policies until they’re 25 and required coverage for pre-existing conditions. What Americans hated was the individual mandate and rising premiums. If the Democrats want to run on bringing that… Read more »

Rich, I am completely aware that a judge deciding to hear a case means that it was well pleaded, not a verdict. However, federal cases aren’t just pleaded well enough to be heard day in and day out, otherwise the courts would be backed up with every kook that thinks the government owes them an explanation on the ufo cover up. What it means is the case moves forward and can’t be considered for dismissal on the grounds that he’s busy doing president stuff. The answer to your second question is “I’m not sure” because aside from jimmy carter I… Read more »

Dang, I’m writing a separate post on this specific topic, was hoping I could get it up before your response so we could carry on the discussion there. You are too quick for me.

“but trump insists (or infers) that a stay in his hotels gets you face time or favors it doesn’t matter wether his sons are running it or not.” What evidence do you have, anything at all, that a stay at the Trump hotel get’s you face time? Doesn’t that hotel have like hundreds of rooms, do you think he meets with all guests? and trump’s insistence that foreign governments traffic his hotels. Ditto my last, what evidence do you have that Trump insists that all representatives of foreign governments stay at his hotel? I’m saying that congress acts onimpeachment matters,… Read more »

Put the post up and I’ll carry on there my dude.

[…] the conversation over from the Stevens/2nd Amendment post, I thought it worthy of its own home. Hopefully The Judge can move his response to my query […]

I find it funny, the left love to pretend that they are the side of peace and enlightenment, understanding coexistence, and all that crap. Then the discussion turns to guns, they tell us we are paranoid, that they do not want to take ALL the guns away, just the ones they don’t thing have value in their view. We get teh same old song and dance, that gun owners are violent and want to shoot anyone that might take thier guns, and then there is a mass incident. They demand that reasonable gun laws be passed, adn in the full… Read more »

All that is why I’m so happy that they’re finally being honest about just eliminating the individual right to own guns, Grendel. They don’t think owning a gun is in itself “reasonable” or that you “need to own an assault rifle”.

To me, all “reasonable” restrictions are a non-starter as long as law enforcement agencies refuse to enforce the law. Start by enforcing the existing laws, and then we can talk.

I get what you’re saying WG – but I don’t think it’ll happen. That’s why you’ve seen the phrase ‘common sense gun laws’ so much so recently. Its getting the talking points in early to counteract this exact accusation that they know they’d be on the wrong side of.

Well, if it helps with perspective, we on the pro-gun side of things see that what the anti-gun side is calling for as “reasonable” restrictions are either already laws that are not adequately enforced or are pointless restrictions that will only restrict the rights of law abiding gun owners without making a dent in gun crime. It’s really sad to me that there is a middle ground on this topic and one place where EVERYBODY could be demanding reform, but it’s getting lost in the entrenched positions. The pro-gun guys either don’t trust the anti-gun side or at the minimum… Read more »

A few meme’s to help point out my views on the debate…because meme’s are the best. 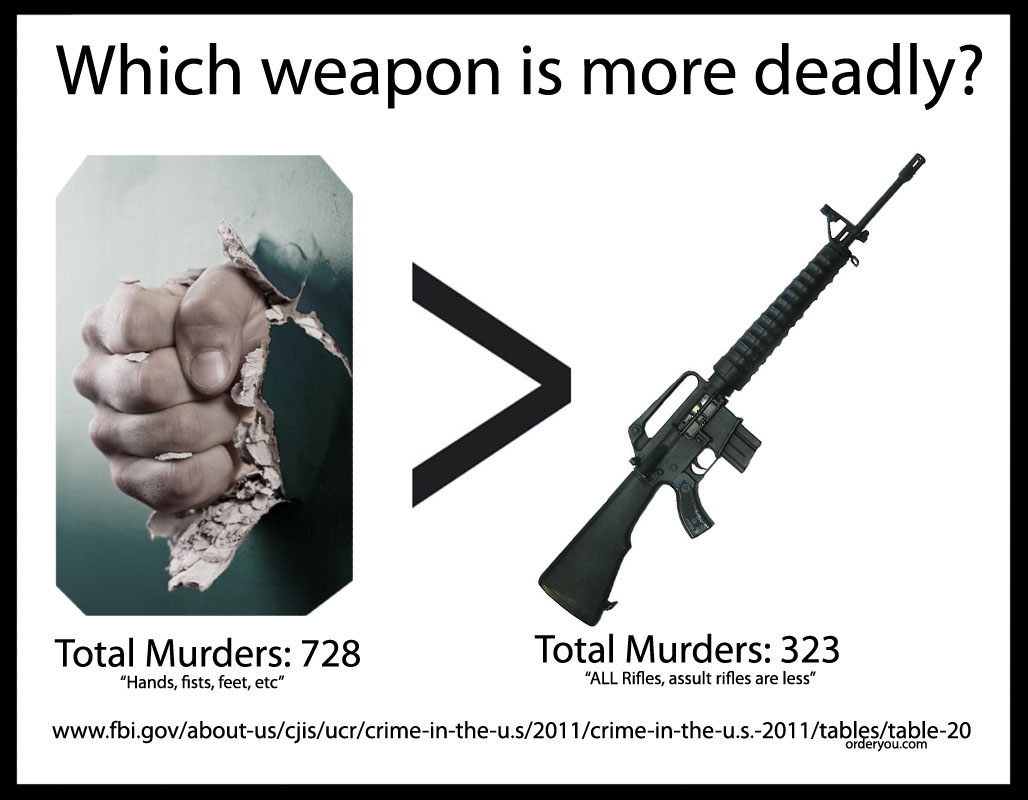 Everything is proceeding according to plan.

The Vice Chair of Civic Engagement and Voter Participation of the Democratic National Committee has called for the repeal of the Second Amendment.

“Repeal the Second Amendment,” she tweeted.