I’m just not ready to let Art Bell go yet.  Let’s have a musical tribute this week.  I figure we’re about as far from next Halloween as we are from the last one, so some paranormal-themed songs are definitely in order.  And a bit more.

Here are some good categories for this theme.

Let’s get this going with one of my favorite moments from C2C history.

pfluffy: Mars Attacks by The Misfits

Let’s get weird with it.  You know, as usual.

Just to start things off:

In honor of Travis Walton.

Smoke on the Water by Deep Purple – https://www.youtube.com/watch?v=zUwEIt9ez7M

Horse With No Name – https://www.youtube.com/watch?v=oEHBTjIYejE

Funny – last night my best friend told us that she has never seen Dusk to Dawn. I am not sure we can be friends until i remedy this.

Dark Night by The Blasters – https://www.youtube.com/watch?v=AhTAkvrD05E

Twilight Zone oh Pfluffy, i Sooooo love this song.,…
Godzilla, being a huge Big G fan ,and my Boys LOve this song too… LOL.

Ghost Riders in the Sky – The outlaws

The Charlie Daniels Band – The Legend Of Wooley Swamp.

as far as sppoky ride songs..
The Longing” – Patty Gurdy (Storm Seeker Song, Hurdy Gurdy Version) i never heard this instrument before a few weeks ago, got a odd vibe and creepy effect to it.

as for hot again women.. well all i got is this video of hot Korean chicks dancing to Gangnam style, it will make you want to move there…
PSY싸이 – GANGNAM STYLE (강남스타일) Waveya 웨이브야 Korean dance team

#1. Calling occupants… https://www.youtube.com/watch?v=JNBV5hofD_U (apparently the Carpenter’s do a cover)

I’ll rate this as a 1/2 – https://www.youtube.com/watch?v=QremHCvOG-I&list=RDQremHCvOG-I

. well all i got is this video of hot Korean chicks dancing to Gangnam style, it will make you want to move there…

How about a little Rush? https://www.youtube.com/watch?v=YTENoLk7cUo

I’ll do you one better – https://www.youtube.com/watch?v=Qr2NRY3HG48

Not sure if this fits for #3 but they’re Asian:
https://www.youtube.com/watch?v=LR_IMmJrPVo

AAAAAH! I love that song.

Can’t believe Grendel left this one on the table.

Sorry for the late adds, I was traveling yesterday.

Mixing in last week’s theme, let’s take it back to one of my favorite compilation CD’s of the 90’s – Pure Moods

Just to get the U2 in, Where the Streets Have No Name for driving on a desert road.

In honor of R. Lee Ermey

Just to get the U2 in, Where the Streets Have No Name for driving on a desert road.

Any CCR song is valid for some desert driving. This one is especially apt for this week though.

That’s why I thought of it. Incredible concert. That screen was nuts.

That’s why I thought of it. Incredible concert. That screen was nuts.

There was one song where just out of nowhere, the screen showed a woman in a stars-and-stripes bikini doing rope tricks. I turned to my wife afterward and said, “Remember the lady in the bikini in the screen show? That was out of place.”

She told me it was The Edge’s wife.

“That just raises more questions. Why in the hell did he have his wife doing that???”

Ahh, that makes a bit more sense since she at least has a tie to the band…still strange. 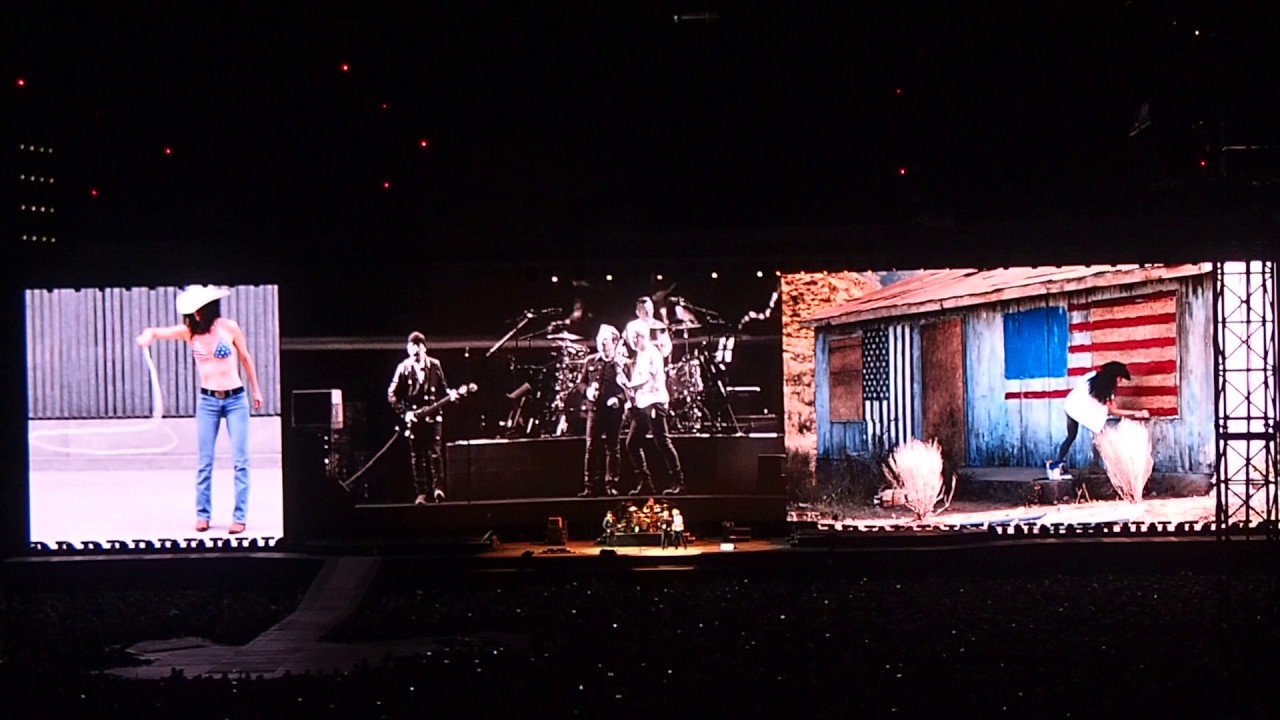