This was so predictable.

Human nature being what it is, any reaction to a perceived ill must be proportional to the sum total of all past ills in that area. So typically what we see is not only collateral damage but a monstrous over kill as to obliterate the mere notion of that ill reoccurring. Thus we have no tolerance policies with drug use, kids getting suspended pointing sticks at other kids, computers that come with 64 gigs of RAM, crying closets at universities, and firing a hellfire missile at a lone Arab getting amorous with his camel. Yes, the job was accomplished, but at what cost?

Now we have the #metoo movement, where a future reckoning will reveal a body count synonymous with Hiroshima. Use whatever adage you got in your drawer; You reap what you sow, the chickens have come home to roost, the bill must always be paid, no one gets out alive.

A genuine concern to address clear breaches of protocol, good manners, sexual boundaries and legality as turned into everything getting thrown in the blender. All infractions, perceived infractions, innocuous actions interpreted as infractions, every interaction between a man and a woman who upon later reflection feels dissatisfaction, regret, or embarrassment, all these are now grist for the mill. Consent is not transitory and can be revisited to eternity;

Can a woman revoke consent after having sex?  American University says, in some circumstances, yes.

Any calls for civility or proportionality (like Matt Damon commenting that  in a culture of outrage a spectrum is required,  a pat on the butt is not the same thing as rape or child molestation) is met with the requisite contempt. Matt is clearly an enabler of sexual abuse.

The latest example of people losing their frickin’ mind is the innocuous joke made in front of a women’s studies professor, off with his head;

He says he was joking when he asked to be let off an elevator at the ladies’ lingerie department. A female scholar who was attending the same annual meeting of the International Studies Association was not amused, and neither was the association when she complained.

Now his refusal to formally apologize has touched off the latest skirmish in the #MeToo battles rocking academe. At issue is whether a comment made in jest rises to the level of a punishable offense, and what happens when a complaint some deem as trivial results in a vicious online backlash against the offended party.

Aside from the obvious, a few things stand out. Is there a more bullshit degree out there in zombie-academia than women’s and gender studies? What exactly are you qualified to do with this degree other than teach the same crap at another university? Shapiro has a standing joke about millennial’s graduating with a lesbian dance theory degree and when confronted with the reality that this person is qualified to do absolutely nothing, it is society’s fault.

The hair-trigger of these women is astounding. Since they did not have the where with all to confront on the spot, the festering begins, then outrage. What to do? I know, lets  contort beyond recognition a code of conduct rule then rat him out to his superiors.  An apology was not enough for her, nope, time for an inquisition. The aggrieved wants her pound of flesh and given the general politically correct nature of academia and the scardy-cat mentality prevalent  now, A Cersie like Walk of Atonement is needed.

What he should have done is turn the tables on her from the beginning. Declare that he is transgender, thinks of himself as female and feels more comfortable in women’s clothing. No muss no fuss.

From a practical standpoint, if he could get away with it, why would any man hire a woman for any job? Since now all interactions between the sexes are wrought with minefields, is it really worth the headache? Some employers are catching on;

In the aftermath of the MeToo movement around sexual harassment, I wonder how much progress we’ve really made; recently, several men have privately told me that they have no intention of hiring women for open roles, or of managing young women if they can avoid it. I now worry that the movement has already sparked a destructive backlash.

Good thing I am out of the workforce, I would have a big bulls-eye on my back mainly because I always used humor to deflect or motivate.

Yes, a happy medium must be reached. Quotas, affirmative action, all this nonsense is detrimental to the free markets. Employers need to hire the best available people. Talent should rise to the top, unencumbered by the particular social hysteria at the time.

What’s wrong with getting 64GB of RAM? My current work laptop has 64GB of RAM (and weighs more than 7 lbs) with a server class processor, and three hard drives so that I can run a number of VM’s at once. Nothing wrong with that. It’s awesome.

as for the rest of the post…. at some point there has to be a break some kid of society wide renascence, or crusade, or.. barbarians at the gates, event that will shake us from this shit.

we got a small group of students at George Washington University, whom are offended my the mascot…. because it is to colonial….

and apparently a Mariachi band set off some and required the Bias Response Team to save the day!

Meanwhile, this guy was apparently a real weirdo, and not nice:
https://www.mediaite.com/online/breaking-new-york-ag-eric-schneiderman-resigns-after-shocking-report/

But I have to wonder if MeToo is reaching a tipping point. You can only get rid of so many creative, influential men before your source of income runs out.

Make sure you’re measuring the right dick, Grendel. I was talking my work laptop. I have an ESXi test lab at home running on three blades with a total of 80 cores, 1TB of RAM, and 70TB of storage. 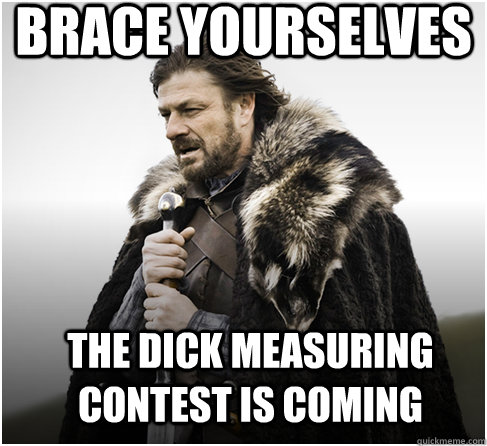 If you guys don’t have something like this in your man cave, you are both pussies;