So this has been said.

If you don’t have the spine for what’s coming then don’t turn on the television next week. You’re about to witness the radical-Left completely unhinged. I know u think you’ve already seen this but prepare for unprecedented new levels of depravity from these extremists. Bank on it

He’s not on my short-list of people who I regularly endorse, but I think he’s right that the rage over the Kavanaugh nomination is bound to reach a boiling point.  It’s the collision of two competing irrational forces: the implacable desire for retribution over Garland and the ax-crazy madness of #MeToo.

As bad as this is, hard to imagine it’ll get even worse when Breyer or Ginsburg has to be replaced by Trump.  Gorsuch was relatively easy since he was just replacing Scalia, for all the grumbling about a “stolen” seat on SCOTUS.  The incorrect assumption that Kavanaugh will be the end of abortion has unleashed Hell.

I hate to spend any time talking about the Kavanaugh nomination since we’ve already been discussing it all week on another thread.  I’ll just say one thing I haven’t before.  For Christine Ford, this is shitty.  It’s a shitty situation.  She didn’t want to come forward, so Feinstein sat on her accusation.  Some asshole, probably a Democratic staffer or maybe even a Senator, wanted her story to be used and decided to leak her name and thus has forced her to come forward.  They did it specifically so that the accusation could be used, her wishes be damned.

That’s really screwed up.  Whether or not you want to pity Ford is up to you, but if they did this to her they would do it to anybody who they could similarly use so cynically.

Yeah, you can argue about the outrageous demands her lawyer is making and point out that her accusation is serving no other purpose but to obstruct what would otherwise be an easy confirmation and be right.  However, I don’t think she’s entirely wrong to distrust the Senate for completely blowing up her anonymity.

That said, she needs to agree to testify this week.  Can’t undo this knot or take back what was done to her either allegedly by Kavanaugh or probably by Senate Democrats.  If she won’t, then the vote must be held ASAFP.

One thing’s for sure.  If and when Trump gets to nominate another Justice, you can bet it’ll be a female judge.  Whether this works for the Democrats or not on Kavanaugh, they’ve already figured out that it worked well enough to get them a Senate seat in Alabama that it’s worth doing at every opportunity.  I don’t really see how else Trump can defend his nominees against it.

Not much else to discuss at the moment from me. What about you?

Yeah, she may have not wanted to get into it publicly (even though she reached out to the Post before politicians…), but once her name was out, she was clearly being driven by the Democrat agenda. She stated she would testify through her attorney multiple times, then the next day when the Democrat talking point became “We need an FBI investigation,” suddenly she changed her tune to needing an FBI investigation before she would testify. I’m sorry if what she describes did in fact happen to her, but the bottom line is, she doesn’t know when, or where, everyone who… Read more »

Now we have a second woman claiming that Kavanaugh, slapped her in the face with his penis……………….https://www.dailywire.com/news/36225/breaking-second-woman-makes-accusations-against-ryan-saavedra?utm_source=facebook&utm_medium=social&utm_content=062316-news&utm_campaign=dwbrand

Unfortunately for Trump I think Kavanuagh may have to withdraw, if there’s still time, and Trump should just wait until it really is time for another Justice to replace Ginsberg. He can concentrate on firing Rosenstein’s ass instead.

Meanwhile, what is #MeToo saying about this? 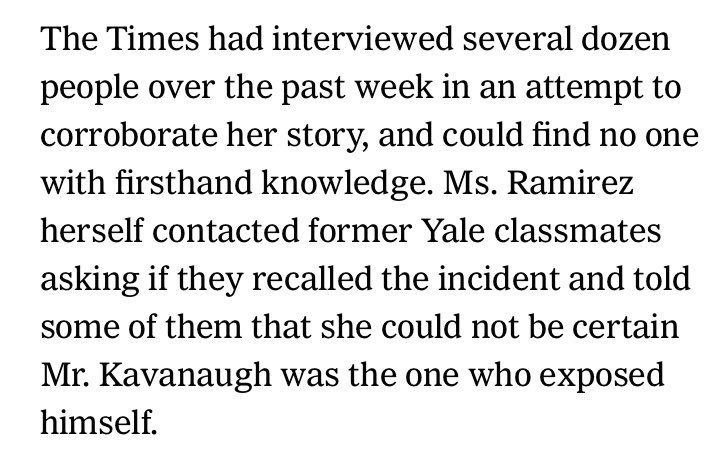 How is this worth publishing? Yet some people still deny media bias.

Unfortunately for Trump I think Kavanuagh may have to withdraw

If that happens, the left wins. Forever. Don’t want a Republican whatever? Just bribe a few bimbos to claim RAPE!!!! PENIS!!!! MOLEST!!!!

We are at war, and the left will do literally anything to gain power. Remember, if you are on the right, the left hates your guts. You should start acting like it

What the GOP needs to do is piss on Ford and hold the damned vote already. Grow a pair, GOP.

Looks like he’s determined to see it through. Good for him, considering this second one that appears to have fallen apart faster than Bill Clinton’s cigar testimony.

Show up or shut up:
https://www.mediaite.com/online/hearing-in-doubt-christine-fords-lawyer-rips-senate-plan-to-have-prosecutor-ask-questions-not-fair-and-respectful/

And it does look like no one is able to back up Ford’s story. So what does the left do? Stuff like this:
https://www.breitbart.com/big-government/2018/09/24/michael-avenatti-brett-kavanaugh-gang-rape-vulgar-high-school-yearbook/

I don’t often agree with Hatch, but he’s got a point.

The Judiciary committee is scheduled to vote friday. Looks like some one decided to shit and get off the pot.
http://dailycaller.com/2018/09/25/kavanaugh-committee-vote-friday/

If that happens, the left wins. Forever. Don’t want a Republican whatever? Just bribe a few bimbos to claim RAPE!!!! PENIS!!!! MOLEST!!!!

I have to agree with this now. Unless there’s some video evidence or some witnesses come forward to verify her version of events, Kavanaugh has to be confirmed simply on principle.

I’ve lost all patience for these tactics and delays. It’s over.

Also Cosby was sentenced, 3-10 years if he makes it that long at his age. Of course it was racist, or something.

this whole thing is starting to take on the vibe that the 80s satanism / child molestation at daycare, hysteria.

Well she’s going to testify today so at least we’ll get to hear more. Maybe at least find out the general vicinity where the house was. I can see not knowing the exact location from decades ago, but since she walked home apparently, she had to somewhat remember the nearby streets. I doubt she walked 20 miles. It had to be near her home area which she should be familiar with. There were only 4 others, so it was the home of one of them. Just too many key details missing other than the emotional part of it which is… Read more »

Well this turned out to be a joke with nothing really changing from the day before. I was a little disturbed that at least two senators praised the fact that she could not remember key details, and basically stated that if you can tie a whole story together it makes your credibility questionable. Seriously, what a bunch of crap. There are victims of crimes who can remember the entire event at least if it occurred recent to the event, and they should not feel that they should leave out details due to this horrible advice that was broadcast yesterday. The… Read more »

Let’s say the FBI investigates. And finds nothing (I mean, what is there to investigate when the victim can’t tell you the time or place of the supposed crime 36 years ago?). Then Democrats/Media cry foul because Trump is the head of the Executive Branch, and clearly the FBI was in cahoots to find nothing. It’s a no-win situation if you are trying to convince anyone who believes Kavanaugh is going to overturn Roe v. Wade. Ford provided no evidence yesterday, whereas Kavanaugh did, and he was just as credible a witness. There is still zero evidence and no corroboration… Read more »

That’s exactly right. I don’t know what the FBI is supposed to do here or even should. I mean, if there’s one thing that the FBI and the people shouldn’t want right now, it’s them getting any further immersed in political processes.

Because guys, it’s not just about going through a pointless FBI investigation, it’s about appearances and the appearance right now is that the Dems did a great job at making it appear there is something to hide, regardless of any credible evidence being presented. It’s also setting the foundation for further investigation into why these accusations came up, the timing, and possible perjury etc. It’s about following through on it so that we can get over this crap that only men lie and women are always victims. Or it may turn up he did do it all which I highly… Read more »

Because guys, it’s not just about going through a pointless FBI investigation, it’s about appearances and the appearance right now is that the Dems did a great job at making it appear there is something to hide, regardless of any credible evidence being presented. What person on this planet that is currently against Kavanaugh’s nomination is going to, after an FBI investigation, suddenly go, “Oh, yeah, now I support him because the FBI found nothing.”? There isn’t one. It’s about following through on it so that we can get over this crap that only men lie and women are always… Read more »

Do the initial FBI investigation which will take a week or two. I give a hard “no” to that. Then the Democrats will run with the theme that “Even Trump’s SCOTUS pick is under FBI investigation!!!111!” No, no, no. Kavanaugh had it right in his exchange with Feinstein. The Senate IS investigating. They ARE questioning the witnesses under oath. At the end of the day, THEY decide what happens with his nomination. If the FBI investigates, they’re just going to tell the Senate whatever the Senate is fully capable of finding out for itself. The Senate shouldn’t be allowed to… Read more »

I agree they will say he’s under investigation. That’s not a big deal though. It was already pointed out that there was an investigation for Thomas as well, it was pointed out that Biden even said nothing comes out of it. There will be nothing new out of this other than more signed statements and interviews with the same result. Apparently it won’t take more than a week or two. It will look good for the GOP. It will not drag through the mid terms. When it comes back that nothing has changed, then the GOP can go on the… Read more »

Section8, I would say that your approach is rational IF we were dealing with rational people on the Democratic side. We’re not. If the vote is delayed any further, I guarantee that the Democrats will have time to find a half dozen more accusers and further cloud the process. Ford has been heard. The Senate is free to judge whether or not they think she’s credible or that Kavanaugh is unfit. Time to vote and do what we elected the Republicans to do: confirm SCOTUS justices. It’s necessary not only to do this, but to firmly repudiate the Democrats’ tactic… Read more »

Welp. Events are following your preferred course, Section8, I think. We’ll see how it pans out.

“The FBI investigated Clarence Thomas. Every Democrat still believes he is guilty of sexual assault.

They don’t want the truth, they want the seat.”