Here I am, headlining yet another Kavanaugh thread.  This really should’ve been over with by now, but the Senate majority can’t be bothered to nut-up and fulfill its responsibility to follow Republican voters’ wishes.  They’re wasting time and not going to change a person’s mind either way, regardless of how the FBI investigation plays out.

Democrats, usually happy to weaponize the FBI against political enemies, aren’t happy about it because it isn’t going to drag on long enough to give them any real future advantage and it probably isn’t going to include every outlandish accusation they can dredge up.  Nobody on that side is going to be satisfied by this and downplaying good news for Kavanaugh is bound to be their tack since the FBI is going to disappoint them (again).  Not only can the FBI not pursue a criminal investigation, even the agencies that have jurisdiction can’t.

The Montgomery County Police and State’s Attorney’s office responded to Democrats on Friday.

The alleged criminal acts of assault and attempted rape were both misdemeanors in 1982 and subject to a one-year statute of limitations.

Therefore, the alleged criminal act should have been reported in 1983 which would have been difficult since the victim has no idea what she is talking about and her “witnesses” ALL refute her allegations.

For the Republicans’ part, the Senators who favor this approach are cowards or hopelessly stupid and naive.  The FBI is going to tell them everything they’ve already been told.  There’s no way to corroborate anything.  Ace makes a great point that Trump’s FBI could deliver a huge win by fully investigating the leak of Ford’s name to the media and other topics related to her credibility, but no way does that get done in a week.

1. Democratic staffers, particularly those of Diane Feinstein, must be asked under oath and under penalty of felony if they leaked Ford’s name and/or her letter to friendlies in the media.

2. Ford must be asked, under oath, which therapist notes she gave to the Washington Post. She was asked this yesterday, but suffered one of her notorious memory lapses and said she didn’t know and would have to ask her lawyers. Which she then proceeded to not ask them.

3. Obviously, any time she claims she doesn’t know and that only her lawyers would know, her lawyers must be asked under oath.

There is no such thing as “Lawyer-Feinstein privilege,” and Ford’s political operators with legal licenses should not be permitted to invent one.

4. Her therapist’s notes must be taken up by the FBI. Literally nobody in America believes that Ford and her husband were at a marriage counselor about a disagreement about adding a second door to the house.

What were they really in therapy for? People have been known to lie in therapy if it’s needed to keep themselves out of trouble from their spouse.

5. Why did she lie when she claimed she could not fly? Did her lawyers tell her to say that? The parties can invoke privilege here, but their invocation of privilege — refusing to answer questions in an investigation they demanded — should be noted and publicized.

6. Did her lawyers inform her that Republicans had offered to fly to California or did they hide that from her? Or did they just tell her to lie about it?

7. All correspondence between her lawyers and Diane Feinstein and other Democrats must be submitted to the FBI. We suspect coordination, and if there’s going to be an investigation, we want it all investigated.

8. Her personal polygraphologist must explain how he conducted the test, how long he took to prep her, etc.

And who paid him. And whether or not a certain result was expected.

9. And a big one — how many other people has Ford accused of sexual harassment or assault? Perhaps this is her first and only time. If so, that adds to her credibility.

I’d love to see it and would laugh at any Democrat who complains.  You’re either happy with an Administration using the FBI to punish his political enemies or you’re not.  You don’t get to excuse or actively cheer on the Obama Administration’s Deep State antics surrounding the 2016 election and then complain when Trump does it right back.

But it won’t happen.  Not more than stuff like this, maybe.  The real prize is the SCOTUS seat anyway and I remain optimistic that Kavanaugh will be confirmed.

In other news, NFL ratings for Monday Night Football went…up…versus 2017.  They’re still down from 2016 though, if I’m reading it right.  Have they reached the lowest point or have viewers moved past their anger over the kneeling protests?  Anybody who wants to continue supporting a franchise that actively hates them is certainly entitled to do so.  I won’t watch football either way.  On the other hand, I really want this to get the national conversation going about subsidizing the NFL now that it has decided to devote itself to left-wing political causes.

Speaking of franchises that hate their own fans, Kathleen Kennedy will remain at the helm at Lucasfilm for three more years.

There’s a surprising amount of joy out of SJW’s over this. It’s a “repudiation of the trolls and haters” or some noise.  As if the anger of fans was only resulting in some likes on critical YouTube videos and not in declining box office sales.  Fairly or not, millions of Star Wars fans hold her personally responsible for some bad decisions surrounding the franchise and believe she should be held accountable for it.  They have plenty of time before Episode IX to damage the brand and it’s obvious that Lucasfilm cannot count on China to make up for the lifelong fans who decide to stay home and let it underperform.

Look, I’m somebody who liked The Last Jedi overall and didn’t understand the hatred it received.  If you didn’t like it, fine, but I don’t see how it did any more damage to the Star Wars universe than The Phantom Menace did.  But even with that aside, I agree that Kennedy is not properly managing Lucasfilm.  I think she should exercise some oversight over Lucasfilm directors and screenwriters who alternately inject their own divisive politics into the canon and directly insult fans who are merely critical of them.

Great, she’s staying on.  Is she going to do anything differently and acknowledge that Star Wars is in serious trouble?  I don’t think so.  As for me, I’m not really looking forward to Episode IX.  I’m having a hard time caring about it or where the story is going.  I can tell you what I’d like to see, but I doubt it’s going to happen.

I’m not going full boycott, but I will avoid taking my family to see it until the third or fourth week after release.  It’s not likely to flop like Solo did (which I will never watch), but maybe a weak opening will convince Disney that the Star Wars name isn’t enough by itself to put asses in seats anymore.  I’m just about done calling myself a Star Wars fan, honestly.

On the flip side, I like the look of the Bumblebee movie.  My interest in the Transformers franchise may yet be rekindled after I gave it up for dead following whichever movie I hated.  I can’t tell any of them apart, really.  I will see that one when it opens.

Finally, on the topic of things that don’t have a large audience in China, here’s one of my favorite new YouTubers.

What else is going on?

Swetnick has her own issues:
http://www.foxnews.com/politics/2018/09/30/kavanaugh-accuser-julie-swetnick-faced-own-misconduct-allegations-at-past-job-with-tech-firm-reports.html

Elon Musk effectively got sacked from Tesla. Now he really will be a pot smoking bum.

Somehow, the Indonesian tsunami will be Trump’s fault.

The Entity formerly known as Kanye West was on SNL this weekend. He tried free speech but the show just wasn’t having it:
https://www.rollingstone.com/tv/tv-news/kanye-west-pro-trump-speech-snl-731238/

This looks to be an interesting month for sci fi fans.

The new series of Doctor Who starts October 7th:
https://screenrant.com/doctor-who-season-11-premiere-video-jodie-whittaker/

The new series of Doctor Who starts October 7th:

Note that it moved from Saturday night to Sunday. I’m guessing the BBC wants to find a reason for ratings to fall and is providing one that doesn’t force them to acknowledge the obvious. 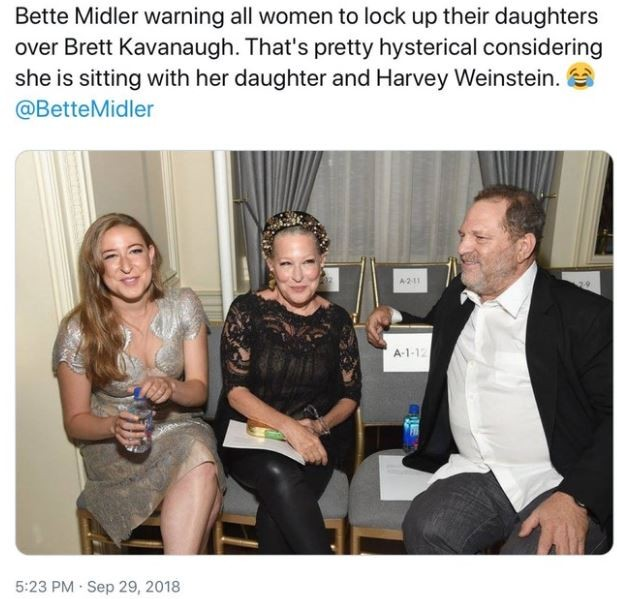 We were told that could not be done, it would start WW1 again.,. or somesuch.

We are now consistently a net crude oil exporter. WE pumped our way out!
https://www.oilmonster.com/article/crude-oil-top-petroleum-export-from-us-in-first-half-of-2018/625

So the series will be over then? god i hope so, i gave up a season or so ago.

Elon Musk effectively got sacked from Tesla. Now he really will be a pot smoking bum.

It also give him the free time to be a real life Bond Villian. a Hugo Drax…

Is China interfering in our elections>? Why wouldn’t they?

On the sale or Arms to Taiwan:
Until trump, nearly any attempt to sell arms to Taiwan was meet with Chinese anger, and a threat of economic repercussions, which was quickly followed by congress critters shitting themselves and finding a way to block any arms deal.
BTW we are retiring some old 688 Los Angelse class boats, why not donate a few to Taiwan.

We are now consistently a net crude oil exporter. WE pumped our way out!

More than any other factor, this is what has permanently altered America’s role in the world. We don’t have to put up with anybody’s shit anymore.

Also. today is the 1 year anniversary of the Los Vegas mass shooting. The official explanation, now, is that he was piss about loosing money at the casinos, even though he had over 1 million in cash and assets//

A future judge walks into a bar:
https://www.seattletimes.com/nation-world/kavanaugh-was-involved-in-bar-brawl-at-yale/

So it wasn’t just because they were mediocre movies:
https://www.hollywoodreporter.com/heat-vision/star-wars-last-jedi-was-targeted-by-russian-trolls-study-says-1148475

McConnell has now publicly stated that they’re voting this week on Kavanaugh.

I had a discussion with one of my friends on Facebook who is significantly to the left, but someone I consider to be rational in most things. Our discussion was around the term “Devil’s Triangle” and how CLEARLY Kavanaugh lied in his testimony about it being a drinking game. My friend claimed that everyone “knows” what it meant, and “knows” he lied about it. He even accused me of “knowing” and being intentionally obtuse about it. I had never even heard the term before all of this. And despite there being no reference to it online being a sexual thing… Read more »

That about sums up everything on the left. They don’t care about real evidence, or facts. They “know” he lied, because…reasons. It’s that weird mentality they’ve had since Election Day that Trump must be stopped for whatever reason however possible or even not possible. The ends justify the means, even if the ends themselves are insane. What they’re doing over Kavanaugh isn’t any different from the obsession with Trump-Russia-Possible Collusion. You can argue it based on facts all day. There is no crime of collusion you could impeach Trump for nor has anything come out that says that it existed.… Read more »

That about sums up everything on the left. They don’t care about real evidence, or facts.

See this is the problem – when you vote for and then continue to support Trump, nobody believes you when you claim that ‘evidence’ or ‘facts’ are important. Even if you didn’t (vote for/support Trump), most on the right (certainly Republicans) still try to pretend climate change is a conspiracy theory / sham. They’re happy to risk our futures for short-term political gain.

Good to see that you’re back, CM. Are you using the account I set up for you?

I did indeed, thanks for that.