One gets the sense that all of the scandals which have been percolating for the past two years are finally ready to boil over.  There’s Trump-Russia, Trump-Stormy, Obama-Trump Spying, Hillary Emails, Clinton Foundation, and the assortment of Deep State workings powering all of it.  Something is coming, but what?  And why is it taking so damn long?

James Comey actually had a terrific insight on this.  Which is ironic, since he more than almost any single person is responsible for it all in the first place.

James Comey: "I hope Donald Trump is not removed from office by impeachment because it would let the country off the hook." https://t.co/ShbuSkNRbh pic.twitter.com/nNcVrTfnPt

I think he’s right, in principle.  If you want Trump gone, repudiate him in 2020 at the ballot box and try to get him indicted for something later if that’ll make you feel better about things.  Where Comey is exactly right is that 1/3rd of the country would regard impeachment of Trump as a coup engineered by…well, Comey for starters.  I don’t see how it can be done without ripping the country completely apart and possibly destroying any remaining respect for our political institutions and maybe even the rule of law itself.

Congressional Democrats may not see it that way.  Pressure upon them will be fierce to impeach Trump and they face the prospect of a full revolt from their base if they don’t act.  Granted, they didn’t run in the midterms of doing this, but they didn’t do much to hide the implication.  I can’t say that I think Democrats would choose to preserve the country for the sake of their political careers.  Can’t say it for the GOP either, really, but right now it’s up to the Democrats to decide what they want to do.

What’s it going to be?  Who’s going to come out on top when all reports are filed, everything is declassified, and the last gavel falls?

James Comey: “I hope Donald Trump is not removed from office by impeachment because it would let the country off the hook.”

Well, he ought to know about letting people off the hook.

Then again, this shows us what an arrogant, elitist prick he is.

Well, he ought to know about letting people off the hook.

Really, yeah. Again, he’s almost totally responsible for all of this from spiking the Clinton Email investigation to the FBI interfering in the election to Mueller’s appointment. He can rail against the impeachment climate all he wants, but we wouldn’t be here if not for the things he actively did that brought it on.

He should be jailed and ruined.

What’s it going to be? Who’s going to come out on top when all reports are filed, everything is declassified, and the last gavel falls?

i have no clue, this is jsut such a confusing mess.
The whole Court drama today. with Sullivan accusing Flynn of Treason, then trying to get Flynn to change his plea…WTF? is going on?
Twitter today was:
Sullivan is trying to save Flynn’s ass and get him to admit he was railroaded.
Vs.
Sullivan called Flynn out as a Traitor!

Sullivan is trying to save Flynn’s ass and get him to admit he was railroaded.
Vs.
Sullivan called Flynn out as a Traitor!

Okay, so I’m not the only one who is totally confused by that whole fiasco. I honestly have no idea if this was good or bad for Mueller or Trump or even Flynn.

Mattis gone now too, the shitshow never lets up,

Trump bails from Syria for no good reason, against all specialist/expert advice, and I’ll bet the folks who railed on Obama for not forcing (by re-taking the govt?) Iraq to extend the status of forces agreement are as silent as it’s possible to be. Even Graham can’t help but misrepresent the situation by making the absurd comparison in an attempt to appeal to Trump’s narcissism.

Trump is, on a dime and without warning to our closest allies, rolling up the American Empire. And he’s doing it not because he’s a peacenik — as far too many self-described progressives are trying to claim — but because ruthless, committed authoritarians have convinced him he needs their continued approval more than he needs the approval of even the Republican hawks in the Senate.

Trump bails from Syria for no good reason

There’s no good reason for the US to be in Syria. Since when do left-wing people want neverending American military adventures in the Middle East? I’m so confused by the new paradigm.

Plenty on the left might disagree strongly with going on adventures, but have the opinion that once you have, you have a responsibility to not then just bail.

I’m so confused by the new paradigm.

Imagine how confused the left are about so many seemingly-intelligent people on the right giving up on pretty much everything they believed, not to mention all dignity and respect, for the sake of a cult of personality.

The world’s-slowest-car-crash sure is entertaining to watch, I’m not sure it’s worth it.

Plenty on the left might disagree strongly with going on adventures, but have the opinion that once you have, you have a responsibility to not then just bail. And some on the left agree with this decision, including one of Trump’s harshest critics. https://twitter.com/tedlieu/status/1075624993936031744 All that remains to do in Syria for anyone is to try to make it somewhat governable again. It’s being contested by all of the regional powers, Russia, and various ethnic groups. Let them have their own quagmire. None of it is our responsibility and there’s nothing of value for us there. Imagine how confused the… Read more » 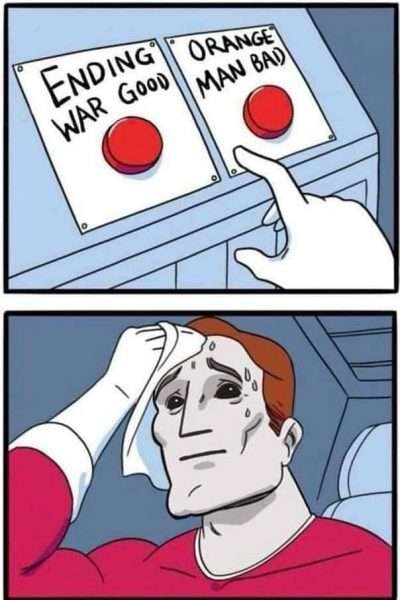 I disagree with your cartoon, Will. The left will go with “Orange Man Bad”, no matter what. It’s a no-brainer.

I disagree with it because it’s not remotely that simple. Once you’re engaged you have a huge responsibility to limit the chaos leaving would result in. No matter who is in charge. But I certainly understand the increasingly desperate need to use ‘Orange Man Bad’.

There’s going to be chaos no matter what. The US didn’t cause the Syrian Civil War nor do the American people have an interest in who wins it. I’m good with leaving it to the Russians, Turks, Iranians, and Syrians who have an interest in the outcome to deal with it.

You’re still struggling with the new reality that the US doesn’t have any need to be involved in the Middle East at all and is acting accordingly.