Oh, my God. Can it please be over already?

It’s no secret that I despise the holiday season. Yeah, call me the Grinch or a Scrooge. I don’t care. Neither one applies. Unlike the Grinch, I don’t want to end Christmas (at least, I’m not actively trying). As for Scrooge, he just didn’t have time for Christmas, being too obsessed with his profit margin and murdering crippled children or whatever he was doing.

This year, I’m simply totally checked out. I can’t remember ever feeling so old and tired and joyless as I do now. It’s not simply Christmas, it’s everything. I’m finding it harder and harder to enjoy anything. I don’t know if it’s something that changed with me or the world or the way I view it, but that’s the way I feel now.

2018 was the year I notice I listened to very little new music. It seems like Alternative is once again sliding downward. I’ve barely watched any of the already-few shows that I was still interested in. And I think I watched fewer movies this year than any year prior.

Everything is dull, lazy, commercial, and unoriginal. In a sense, I now feel the same way about everything that I long have about Christmas. It’s all empty and meaningless and played out.

On Friday, I saw that new Bumblebee movie. I took a chance on it because I really hated the Michael Bay movies but this looked like an improvement. Like it would invoke much of the G1 Transformers that I grew up loving.

Having viewed it, I’ll just say it was “okay”. It wasn’t terrible and I didn’t hate it. It was a coherent story and I liked the female main character. She was an excellent example of what sci-fi writers should do who want to write a strong female character: make her a relatable human being first who rises to the challenges presented to her in the story first and focus on the wider social justice goal of empowering all women….never. Everyone else was good too. I have no specific complaints about the characters or story.

But you know what? I may not have hated it, but I certainly didn’t enjoy it. The movie’s flaw, in my eyes, was that it couldn’t decide what it wanted to be, but it sure as hell didn’t want to be anything new. Sure, the Transformers all looked more like the G1 versions of themselves and I loved that so much as a boy, but the Michael Bay elements were still there. Confusing, seizure-inducing battle scenes. Some groan-inducing humor. And finally, the disgust-inducing nostalgia.

Yes, the nostalgia is a problem. Like far too many things these days, it wasn’t just a revival of a 1980’s franchise, but it was even set in 1987. Have you noticed this happening? Stranger Things, that GLOW show on Netflix, and I don’t know what else are all either set in or derived ideas from the . Is that really a bad thing? Well, yes.

See, I watched Ready Player One a couple of months ago. Hated it, by the way. It was entirely too long. But what bothered me about that movie was the idea that decades from now, people are still going to be obsessed with the . The idea that my grandchildren will still be into John Hughes and want to ride around in Doc Brown’s DeLorean bothered me.

I started to wonder if that wasn’t an acknowledgement that there was going to be nothing creative or new in the following decades. That the creatively spent entertainment industry we live with now is the new normal and the 80’s were the last decade in which anything original, bold, or enduring was produced from it.

Think about it. The mid-80’s were the last time pop culture wasn’t fully seeped in safe and uninspired remakes, whether they were endless sequels or movies based on old television shows. Maybe it is that 80’s nostalgia is being invoked to appeal to those of us of a certain age who have money to spend, but I don’t think so. I think it is bundled up in an acknowledgment that the arts have been on a long and steep decline for the past 30 years.

How do I feel about, as someone who remembers the 80’s fondly and rather appreciated living through them? Awful. I want my kids to have their own artists and works to enjoy, not to relive my childhood. Sure, it’s fun to rock out to Motley Crue with my son but it’s also sad. I was listening to New Wave at his age, not music from the 50’s.

I watched the Decepticons massacre half of the Autobots in , original Transformers movie when I was his age and even though it was shocking, it was bold. That movie (toy commercial that it was) took everything in a stunning new direction. My son loves that movie and I can’t bear it. There’s nothing made like that anymore. Certainly not for kids.

What I find instead is that the world is joyless. No, my life isn’t awful and I don’t have it bad by world history standards. I’m not whining about my life. What I am whining about is how aware I’ve become of the joylessness of modern culture and my own disgust for the millions of people who can’t see it for what it is.

Christmas is no different. We put up the same decorations, watch the same movies, listen to the same tired songs, watch the same specials, year after year. We deal with the stress and the unhappiness and lie to ourselves about how it’s the happiest time of the year. We act excited to receive the junk we get from other people that we would never buy for ourselves. It’s ridiculous and I can’t believe that most people don’t see it for what it is.

I wish I could opt out, but it’s impossible. It saturates everything and there’s no escape. This year I have no joy. I’m weary of it all.

Anyway, I didn’t mean to shit in your stocking with my ranting. If Christmas is your thing, have lots of fun. But if you’re like me and trying your best to disconnect, please talk about something, anything, in the thread.

Well, Congress went ahead and gave the government a Christmas vacation. I don’t really have a problem with this. The shutdown will end, and life in DC, such as it is, will go on until the next one.

Now this is sad, but offers so much opportunity for gallows humor especially if you hate boy/Asian K-Pop bands:
https://www.cnn.com/videos/world/2018/12/23/indonesia-tsunami-band-swept-away-sot-newday-vpx.cnn

Now is the time for the airing of grievances:
https://www.thegatewaypundit.com/2018/12/rand-paul-takes-savage-shot-at-elizabeth-warren-during-festivus-airing-of-the-grievances/

It’s nothing new really, WG. I think you are about the same age I am. So don’t forget what was still big on TV at our age. I Love Lucy Andy Griffith Leave it to Beaver Twilight Zone (along with a remake which sucked) and a bunch of other old shows. Happy Days was one of the biggest sitcoms during our childhood years and was all about the 50’s. No doubt most everything that comes out of Hollywood is crap, so the things that are good tend to stay around for a while and get reused. Fact is most shows,… Read more »

One thing that bugs me about Jesus’s birthday is that the holiday is always on a different day of the year. It messes up schedules and is a pain in the rear if you forgot something at the store and have to wait an extra day. It really needs to be on a fixed day, like Thanksgiving, preferably Sunday or Monday of the week of the 25th. NOOOOOO. That’s exactly what I’m griping about. Well, some non nostalgia fare then: https://www.youtube.com/watch?v=mHmzq7cCRW4 Unfortunately, there doesn’t seem to be a whole lot that today’s kids will have to be nostalgic about twenty… Read more » 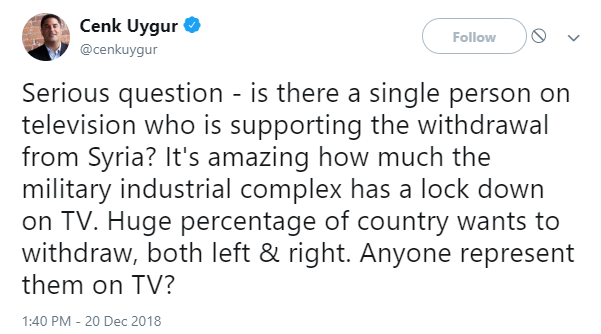 What i find amazing about this sudden pull out of Syria is the perception, that we have thousands and thousands of troops that and if we pull out all will collapse. Syria was/is a russian client state, , that for some reason the Obama administration decided had to go and started supplying various rebel groups, and instigated a civil war. Syria starts loosing and the junior varsity team rises up to take a big swath of it ,and for much of the Obama administration we either ignored it of just made half hearted attempts to neutralize it. Russian rollin troop… Read more »

Ready player one, i was underwhelmed… Yeah i just cant see kids in 4 years or so being enamored by 80s TV movies, like that. the only part i really enjoyed was the last battle when mr big bad business man piloted a mechagodzilla…

Syria was/is a russian client state, , that for some reason the Obama administration decided had to go and started supplying various rebel groups, and instigated a civil war. One thing I’ll never understand is why the Obama Administration insisted on fecklessly destabilizing shitty but tolerable Mideast regimes like in Libya, Syria, and Egypt. Not only was it done and had disastrous consequences that benefited ISIS and other extremists, but it was never justified to the American people nor was there even a minimal effort to make it legal with congressional authorization. There are things the Obama Administration did that… Read more »

Ready player one, i was underwhelmed It’s another one of those movies that was “fine”. No more, no less. I’m sick of movies being so stupid long. There’s no reason why that story couldn’t have been told in 100 minutes. It’s never a good thing when a movie is two hours in and I’m like, “Jesus, why is this still going on? Wrap it up!” Then it turns out there’s another half hour to go. Bumblebee was just under 2 hours, which was tolerable, but it still could’ve been shorter. Contrast that with the piece of shit that was Transformers:… Read more »

Ready player one, i was underwhelmed

I thought the movie was decent. But the book is quite a bit better. Which can be said for most if not all movies made from good books.

I thought the movie was decent. But the book is quite a bit better. Which can be said for most if not all movies made from good books.

I think Fight Club is the only exception.

One thing I’ll never understand is why the Obama Administration insisted on fecklessly destabilizing shitty but tolerable Mideast regimes like in Libya, Syria, and Egypt.

why? hmm maybe because they were of the very few secular governments inthe Mideast?

why? hmm maybe because they were of the very few secular governments inthe Mideast?

But even then, why?

But even then, why?

because they could? Iran wanted it? Obama wanted a caliphate???
Any answer starts diving deep in to the conspiracy mongering ……………
I have no clue waht they expected to achieve other than more discord and chaos.

Khashoggi was a paid agent of Qatar, working to upend the new leadership in SA.