Oh, I hate to write about that ad and give it any more oxygen than it deserves. But I’m seeing discussions about it flooding all of my social media accounts, so I will take some time and complain about it too.

First up, I think this guy did a fine job breaking down everything that’s wrong with the ad itself.

this is another one of those situations in which a corporate entity whose products I don’t use has done something that makes it, shall we say, less likely that I ever will use their products. I’m not talking boycott necessarily, since I’m already quite happy with my old fashioned double edge safety razor and generic shaving cream that aren’t produced by Gillette. Just the same, I’m angered by this.

It’s not that I disagree with the message that men shouldn’t be assholes. That’s pretty much the philosophical basis for the great religions of the world.

What triggers me is that this is yet another example of corporate America taking it upon itself to lecture and preach at me. If your core fucking reason for existing is to sell environmentally-unfriendly disposable razor cartridges, I don’t care at all what you have to say on any social topic, ever. This goes for all of these “socially conscious businesses” in all industries honestly. Sell your products or fuck yourself with them. I don’t care.

What is it about this stupid decade that people think they have the right to incessantly preach their own bizarre and divisive morality at every turn and that it’s a great idea for businesses to do it to their core demographic at the expense of running their business?

Honestly, this practice is so self-destructive and yet so prevalent that I have to wonder if it isn’t being coordinated somehow for some evil purpose by some unseen forces. If corporate entities were actively sowing social chaos for the sake of profits, that’d be one thing. This? It’s senseless.

I really just want Gillette and other companies that think it’s their role to harangue me into to get hurt. Not just financially. I want them to pay for their arrogant stupidity in all ways imaginable. I want them to get shocked trying to get out of a plugged-in toaster with a knife. I’d like to see a member of their board of directors slip on ice and bust his “toxic male” ass running through the parking lot because he’s late for a meeting.

Think I’m being too harsh? I’m not. This is the result of years of being told in media what a terrible person I am and I’m truly sick of it. They’ve made it personal and I’m returning the ill-will.

I certainly don’t have to take this shit from companies like Gillette, whose parent company (Procter and Gamble) known for exploiting women and children workers in hazardous–dare I say “toxic”–working conditions.

Quit lecturing me with your vapid hatemongering and execute any member of your marketing team who even breathes Culture War expressions like “MeToo” within the walls of your office buildings. This goes for all businesses regardless of . If you try to screw with my worldview and suggest that I, the customer, am not doing enough to be a good little social justice tool in your eyes, I’m not buying your crap. I will also apply my own twisted morality and pray for your ruin.

Belated disclaimer: I’m not calling for acts of violence against any individuals or business. I’m merely calling upon the Old Gods and the New to unleash a divine sort of punishment upon them for annoying the hell out of me.

On the topic of corporations destroying their brands by senselessly engaging in identity politics, we’re now the top Google search result for “lando fucked his droid”.

This is inventive. Someone set up a livestream of deleted comments under the Gillette YouTube ad. Most are pretty innocuous.

I switched to a DE safety razor last year. I was already never planning on going back to cartridge razors, this cements that if I do, it will never be a Gillette razor again.

DE safety is the way to go, honestly. Even that dollar shave club can’t compare with the cost of razor blades in packs of 100. I’d recommend it even if not for Gillette’s social justice retardation.

This is the best summary I’ve seen:

And any of these would have been productive if Gillette absolutely felt like it had to virtue signal. At minimum, they wouldn’t have lost a single customer for it. I saw this ad on a news site, played it…. and thought to myself, “What the fuck does this have to do with shaving?”

Another YouTuber pointed that the insanity of the ad including purported Armenian Genocide Denier Ana “Women Who Voted For Trump Are Idiots” Kasparian within the video (00:40 in the commercial). This is her:

This wasn’t mere corporate pandering. Whoever put this ad together and approved it BELIEVES in what they were doing.

Nothing to do with shaving.

It’s all about “having a discussion”. Except, you know, that they delete the comments of anyone who disagrees with their decision to wade into divisive identity politics thus rendering a discussion impossible.

A off topic question: This whole shutdown situation is being drug out by the democrats. Let me explain why i think that. I can recall at least 3 times in the last 25 30 years that money has been appropriated for construction of fences barricades walls and such alone the us Mexican border. I also recall that nearly every time that construction has started it was stopped early by a avalanche of lawsuits,court orders, and congressional actions. The Democrats in power have to know that every anti trump nutter with a few lawyers to rub together is gonna file lawsuits,… Read more »

Hmm. A lot to unpack here. My theory is that Schumer and Pelosi are pretty much doing the same thing as Gillette. They are so busy putting out the political message they want that it’s ruining their purpose of serving their actual ends. A good example is the Gorsuch nomination. At the time it was going on, I remarked on how stupid it was for Schumer to have refused to relent at all on allowing the nomination to go forward for the sake of #Resistance. In the end, Gorsuch was confirmed and the judicial filibuster was eliminated. Had Schumer been… Read more »

Then there’s this from Egard Watches. Nothing to do with selling watches, but at least it doesn’t antagonize the people it’s supposed to be selling watches to or engage in any other divisive messaging.

Quitcher cryin’ and listen to some Clutch:

OT: But the escalating slap-fight between Trump and Pelosi with regard to SOTU invitation and flying on military planes is absolutely hilarious. It’s almost like “War of the Roses” or “Dirty Rotten Scoundrels” in terms of wondering what outrageous shit they’ll do next to outdo the other.

Whatever happened to the days when advertisers just sold their clients’ products? Also it looks like The Rat might have tried to bribe the Drudge Report, or something.

It’s almost like “War of the Roses” or “Dirty Rotten Scoundrels” in terms of wondering what outrageous shit they’ll do next to outdo the other. I mentioned in this week’s DJ post that much of the Trump presidency is straight out of a Hiassen novel, specifically the ones with “Skink”, a former Governor of Florida. As for the Gillette ad, most people seem to be missing the point. You can make the case that Gillette has overstepped I guess, but there is a big difference between normal levels of masculinity and being an asshole. I grew up with bullying and… Read more »

“Because most people aren’t good enough to be our customers”

but there is a big difference between normal levels of masculinity and being an asshole. The simple distinction which could be found nowhere in that ad, missed point indeed. Everything in that dopey ad; bullying, sexual harassment, treating women like sex objects, that is not manliness, it just the opposite. True masculine manliness respects women, they cherish, uplift and protect women. They recognize the differences between the sexes, both in biology and societal obligations. I too have had some uncomfortable episodes in the past workplace where women have, probably innocuously, touched my shoulder, arm, straitened my tie or my shirt… Read more »

As for the Gillette ad, most people seem to be missing the point. No, we’re not. Sure, some men are cruel to women and each other. And this is also true of women as the above parody video demonstrates. I mean, can you imagine a Playtex commercial that decided to raise awareness for the men victimized by women who fabricate allegations of sexual assault and harassment? It’d be the same thing. The radical feminists who wrote this ad are at war with masculinity itself. They don’t mean masculinity that’s toxic is the problem. They mean masculinity is toxic. This is… Read more »

Point absolutely taken, Rich. Subscribe to any decent looking male celebrity’s Facebook page and see the comments. I am pretty immune to “offense” but I admit the comments get pretty creepy if you imagine a man openly putting them on a female celeb’s page. I don’t necessarily think that the ad was necessary or Gillette’s responsibility, I am trying to give the female perspective here. I seem to be the only one remaining here 🙂 … Edited to add: Your point is taken, too, Thrill. Women wouldn’t appreciate it in the reverse. Not a chance! 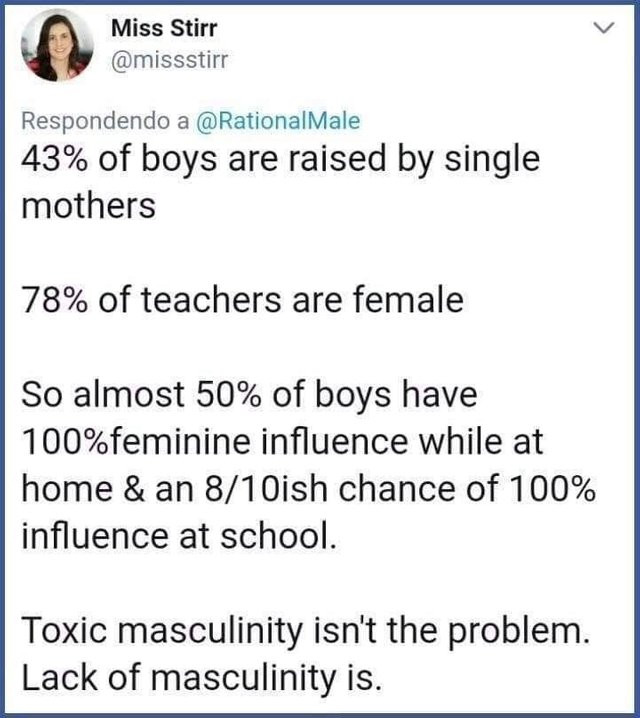 I am trying to give the female perspective here. I understand, and no doubt all those incidences with the cat calls when you were growing up were humiliating, but real men, like the type of man you are raising your son to be, they knew that already. No doubt you would like your son to have every opportunity growing up to be successful, to achieve all his life goals and be happy in life. Here is the ugly unvarnished truth; our society as it is today stacks the deck squarely against white males. Radical feminists, LGBTQ proponents,identity politickers and anti… Read more »

Regarding the shutdown, this popped up on my “Memories” on Facebook this morning:

Congressional Republicans circa 2013: “We need Immigration Reform before funding the government.”

The same Congressional Republicans 2017: “Holding up funding the government for Immigration Reform is unconscionable.”

Congressional Democrats circa 2013: “Holding up funding the government for Immigration Reform is unconscionable.”

The same Congressional Democrats 2017: “We need Immigration Reform before funding the government.”

Apparently the parties have flipped again just a year later.